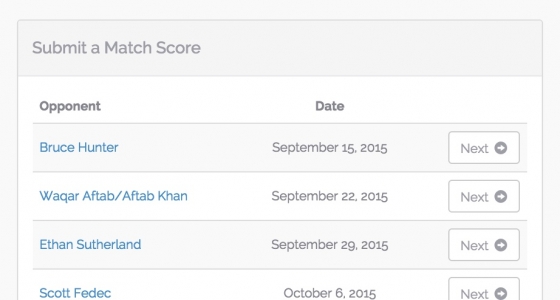 Once a player has logged into the Member's Area, they will be able to view a list of all their scheduled matches for the season. This list provides them with the opponent name and scheduled date so that it can be identified. Once they have located the match they would like to submit a score for, they just click the Next button to get started. 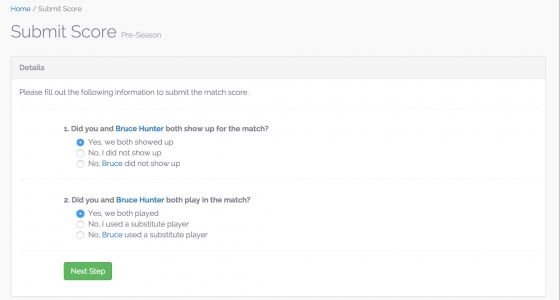 The first step in submitting a match is answering two basic questions. They are:

In answering these two questions, League Engine can determine whether the match being submitted is a regular match, substitution match, or no-show match.

A regular match is defined as a match between the actual opponents, where no substitutes were used and both players showed up to the match. In this situation, the players and their teams are awarded points.

A substitution match is defined as a match that one (or both) of the players used a substitute player for. In this situation, both teams are awarded points, but the individual(s) who used a substitute do not get points awarded to them as a player in their level.

A no-show match is defined as a match that one of the opponents simply did not show up to. In this situation, the player who did not show up and his or her team have two points deducted, and the other player and his/her team is awarded four points.

Once the first step has been completed and League Engine has determined how the points should be awarded, the players can then submit (a) who won the match, (b) in how many games, and (c) when the match was played.

Ready to create your league? It's easy. Contact Us